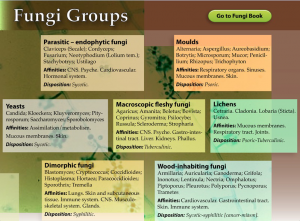 “The various repertories and homeopathic encyclopaedias list 72 names of fungal remedies [fungal compounds included]. Of these, 32 fungi are represented in the abbreviation lists by nothing more than a name, i.e. there are no symptoms, whilst of the remaining 40 fungi 27 have less than twenty symptoms. It leaves us with 13 fungi we might possibly come across when repertorizing. Yet, even that number does not reflect the actual situation. Our understanding of the entire kingdom is based in essence on a total of three fungi: Agaricus, Bovista, and Claviceps [Secale], with a few more having a place in the background: Psilocybe, Ustilago, Sticta, Polyporus officinalis, Candida albicans, and the fungal compounds Alcoholus and Penicillinum. This well-known trio supplies the rudiments, the basics, the ABC of the homeopathic perception of the kingdom. One may safely assume that such a foundation is too narrow.
To broaden the horizons – admittedly, my own in the first place – I have spent some years studying the biology of fungi and collecting evidence from the dusty corners of homeopathy. All gathered material I have put together to come to a working hypothesis designed to enable pattern recognition. Emphasis is placed on the biological features of the individual fungus, based on the conviction that similarity is a matter of analogy between the nature of the substance and the nature of the person. Defining homeopathy as a process of cause and effect [“What can cause can cure”] seems to me too limited and too limiting.”