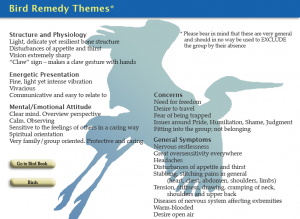 Book extract-
“My first bird prescription came about in this way: for some 3 or 4 years I had treated a young woman, initially with Cann-i and then with Natrum phosphoricum. Although the remedies acted well she continued to return with the same complaints. During these years she would tell me of her recurrent dreams of collecting feathers and using them to build a pair of wings. Not having any repertorial references or any satisfactory basis for homeopathic interpretation this data played no part in the choice of remedy. With the passage of time and the influence of Rajan Sankaran, the possibilities of what may or may not be useful information for prescribing took on a new life and the idea of bird entered my mind.
Certain events assume a life of their own, having a potential way beyond our immediate understanding. The next time I saw her she reported a detailed and vivid dream of an eagle. The only bird remedy available at that time was Eagle (Haliaeetus leucocephalus 30C), it having been recently proven by Jeremy Sherr. The clarity, depth and duration of the response affirmed the correctness of the choice. At this same time one of the students at the Hahnemann College needed to complete an original research project as part of the course requirement. At my suggestion she chose a bird (a red-tailed hawk) for a proving. This remedy was proven both in the classical way by her as well as in the form of seminar provings in Finland and Germany by myself. The collected data was quite extensive and reliably uniform between the American and European experience despite the diversity of methodology.”